Home / Blog / The Houses of Pompeii. Which one you absolutely have to see.

The houses of Pompeii

The discovery of Pompeii and Herculaneum gave the scholars the chance to discover many ditails about Roman houses. In Pompeii we have several types of houses but around 40% belongs to the atrium type. The atrium house was inizially characterized by a central courtyard, called atrium, and several rooms open on it. One of these rooms was called tablinum and was the place where the owner of the house was storing the documentd and received guests. Than there were the dining rooms called triclinia and the bedrooms called cubicola (from the latin word cubare which means “sleep”).

The appearance of the peristyle.

The garden, as well as the compluvium in the atrium, is essential to let light enter in Roman houses that are completely closed to the outside. Before rhe introduction of the garden, in the back of the Roman houses, there was a small vegetable garden for family use. Some houses in Pompeii still have this small vegetable garden, like the house of the sourgeon which has identified as the oldest house in Pompeii, dating back to the 4th century B.C.

Some of the casts of Pompeii have been found into the houses.

The casts of Pompeii. How are they made?

Which houses must be seen in Pompei?

There are many houses in Pompeii, so many that one day would not be enough to see all of them. Some, however, must be seen (check on the official website of Pompeii  if they are open).

First of all you have to see the house of Vettii, belonging to two brothers, Aulo Vettio Conviva and Aulo Vettio Restituta, who produce wine. In this house it is possible to admire splendid frescoes that help you understand how the Pompeian houses were actually decorated.

This house was excavated at the end of the 19th century and was one of the few houses not already discovered by the treasure-hunters. The house was formed of two smaller houses combined around the 1st century B.C. In this house the tablino is missing but there is the peristyle.

The house is famous above all for the wall decoration composed of frescoes with mithological scenes and panels with cupids performing various trades.

The house of Menander

This is a classical house of a high-ranking family. Some scholars think this could be the home of Quintus Poppaeus Sabinus, a member of the Poppei family to which Poppea Sabina, Nero’s wife, also belonged.

In the atrium and in the peristyle of this house it is possible to see a shrine dedicated to the gods of the house. In a corner of the atrium there is also the staircase leading to the second floor of the building and a room decorated with scenes concerning the fall of Troy.

Tha house is called House of Menander because of a fresco which is in the garden rappresenting Menander, a famous Athenian playwright.

The house of the Faun

It is one of the larger houses of Pompeii covering a area of 3000 square meters. This house date back to the 2nd century B.C. and is formed of three smaler houses combined.

The house takes is name from a little statue of a dancing satyr (Faun) found in the centre of the atrium. This statue is probably the symbol of the owner, one of the member of the Satrii family.

The house is huge and consists of two atria and to peristylia. Flors are decorated with mosaics or pieces of colored marble. The most famous mosaic is found in the room that separates the small garden from the large garden and represents the last battle between Alessandro Magno and Dario the king of Persia.

If  are interested in a guided tour of the site with an official guide, graduated in archeology 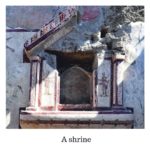 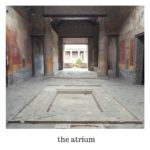 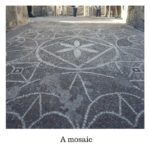