Home / Blog / The casts of Pompeii. How are they made?

There are people who call them petrified men, som mummies, some simply the bodies, but they are casts, just plaster casts.

Visiting the archaeological site of Pompeii you will see some strange statue made in plaster or cement. Contracted bodies, lying down or hugging each other that sometimes retain traces of clothes. This is not modern art but simply the casts of the inhabitants of Pompeii that, such as the buildings and the objects found on the site, can help us to better understand a culture and a world now disappeared.

So it means these are modern objects preserving traces of a drama that took place almost two thousand years ago.

Pompeii casts. How are they made?

How are they made?

Giuseppe Fiorelli, director of the Pompeii site for many years, is the man who developed the technique to realize the casts. Fiorelli made the fist casts in February 1863, some of them are now visible in a display case at the Sirico House, not far from the brothel of the ancient city.

The bones of the ancient Pompeians, who survived the ravages of the time, have also been trapped inside the liquid clack, that why we can obtain very important information about the health, the age and the social status of the dead.

The most famous casts were created by Amedeo Maiuri, the archaeologist involved in the excavation of the so called “fugitives garden”. This place was so named because the casts of thirteen people who sought refuge in this place were found here.

The casts of Pompeii have been subjected to different types of analysis, including DNA and tac examination. This type of analysis has provided us with very important information about the health conditions of the people from Pompeii. As already mentioned, inside the casts, the bones of the Pompeians are preserved and the latter can provide vary important information if studied carefully.

The position, often contracted, which characterizes the casts is due to the thermal shock. Many were the Pompeians killed by the waves of hot air that reached the city. The air temperatures aroudn 300/400 ° C (500/700 F) literally cooked the bodies causing a muscular contraction.

Archaeologists produced casts of domestic animals too. We have, for example, casts of a dog and a pig, which is preserved in the Boscoreale Museum along with many other objects used in rustic villas of Pompeii.

Dogs, as we know thanks to many mosaics, were often the best guardians of the roman houses. Very famous is the mosaic at the entrance of the Tragic Poet’s house where it is represented a dog with a chain and the words CAVE CANEM (watch out for the dog!).

Tha casts of Pompeii are all around the archaeological site. Many of them are preserved in a glass structure outside the amphitheater gate. Some others are in the house of Sirico and the Cilla of the Mysteries.

Private and Group tour in Pompeii. 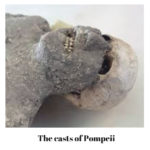 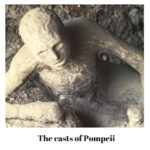 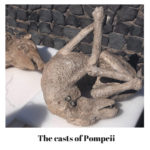 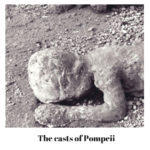 Article Name
The Casts of Pompeii. How are they made?
Description
The casts of Pompeii are not petrified people, not mummies but plaster casts of the bodies od the Pompeians. Let's discover together how they are made.
Author
Sara Prossomariti
Publisher Name
Morosofi Guided Tours
Publisher Logo